You call this painting? Getting acquainted with the closet of a 1950s drag queen 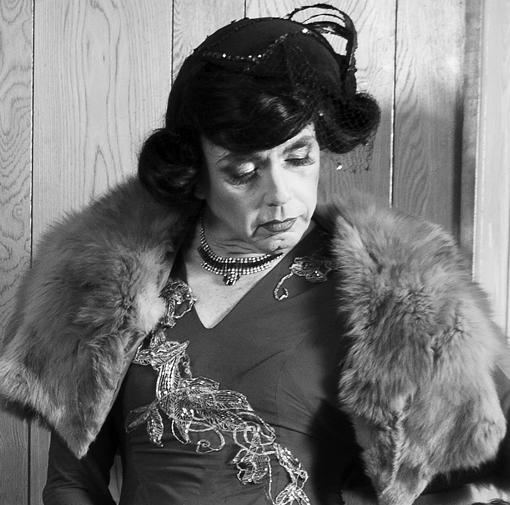 How to play a 1950s drag queen! I had attempted to play a real woman in a short film and had a few seconds as a drag queen in another short film, but with no dialogue. So really this was a new challenge. Castruccio in the original version of The Duchess Of Malfi was an old man, so not much help there.

I looked up drag queens in the 1950s. I discovered that after the second world war, drag on the London stage was quite popular. Audiences often assumed, or chose to believe, they were seeing the sort of shows put on by the forces when women were not available to take part.

However, in the mid-fifties, this died out after a notorious case when Lord Montague was imprisoned for ‘consensual homosexual offences’. Then in the early sixties, Danny La Rue opened his club and his version of drag became extremely popular.

So what I took from this was that in 1959, when this version of the play is set, drag was risky and fairly private. Castruccio would have to have been quite brave but also pretty circumspect. He would be used to insults. Above all, he was a survivor – indeed literally so, as he is one of only two people left alive at the end of the play. I saw him as someone who loved to get down and dirty, yet was also an outsider and an observer.

I’ve tried to make his voice a mid-twentieth century cockney. Having been unwell throughout much of the rehearsal period and all the performances, this undoubtedly added a husky quality – ‘gin-soaked’ someone said!

The real transformation came from the wonderful make-up applied by Stephanie Stokkvik and the costume and wig produced by Rachel Machlachlan. Wearing high-heeled shoes (my own, but from one of those short films!) helped massively.

So thanks, Daniel and Martin, for this remarkable opportunity!