Making this piece visually accessible to everyone

Designer Ingrid Hu talks to Inky Cloak about her approach to designing the set and costumes for We Raise Our Hands In The Sanctuary. 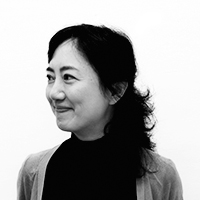 How did you approach the task of production design? Did you start with an overall concept or did you find the concept through research?
It’s a bit of both actually, I think in the beginning there was a very clear direction in terms of knowing that it was not going to be a direct recreation of Eighties London club spaces. Then the research was rather selective because of that. The potential not having a fixed stage and auditorium at The Albany also opened up possibilities.
I started looked at club spaces from the era but quickly realised that venues were known for their programming of DJs and performers rather than the space. To allow the staging to be as visually fluid as possible, I initially suggested projected imagery and a very basic spatial layout. Martin and Dan then gave me some references of club spaces in Italy that were colourful and energetic, suggesting a fantasy-like installation space, which steered me to look into what inspired the designers in the Eighties.
What did you find most striking in your research?
I think Leigh Bowery as an avant-garde artist is fascinating, and influenced me for sure on the costumes and my understanding of drag characters. There was a very good exhibition at the V&A called ‘From Club to Catwalk’ three years ago, tracing the development of fashion in clubs and how it influenced high fashion. That’s quite an inspiration.
In terms of space I looked at 1980s aesthetics and designs, more at the products and the materials being used at the time, than particular spaces. There was an excitement in designing objects that look shiny, bright-coloured, and geometrically bold. So the design is very much about staging those qualities.

How did you approach designing the costumes for Brandi, a character who isn’t tied down by gender or any kind of conformity?
At first it was to understand that he is not your typical drag queen! Again, Leigh Bowery provided a great inspiration and mirror to Brandi as a character, but I also compared Brandi to those going to Taboo (the club that Leigh Bowery ran in Soho). Costume ideas emerged after understanding that Brandi is in a league of her own, and thinking about what kind of inspirations she would be drawing from in the Eighties – the kind of materials she would be exposed to and objects that were popular at the time – vinyl records, hula hoops, synthetic fabrics and DIY culture, what’s trendy and what’s not.
It’s also thinking about the character from a blank canvas: imagining a drag character who is obsessed with her appearance, who sees herself as so distinct, and what she would respond to around her in terms of people and events, rather than trying to be a certain stereotype. I also think she is constantly exploring her identity and her costumes reflect this. Brandi is all about reinventing herself; I was imagining how she would imaginatively design and make her own outfit to express her inner states.

Were you influenced by any particular real life people or club spaces?
Through friends I met with a club promoter called Joe Parslow who runs a venue called ‘Her Upstairs’ – the latest addition to the queer scene in Camden – and who is also, serendipitously, doing a PhD in Queer Spaces! In some aspect he’s like Paul in the play. Needless to say, I found our conversation extremely useful because I feel there is a need for the play to resonate with today’s world… and there, sitting in front of me, is somebody who is doing that now, today, amazing! I was very young during the eighties so there’s no point trying to imagine what it was like back then but I can relate to what remains today. He [Joe] provided lots of information about how his place is run and explained that you have very small, tight and basic space, you have to make it into a big event through programming, through music, artists you meet and all that. He also gave quite a few names of avant-garde drag characters in London today and that was an amazing resource really. There’s a recently published book called ‘Night Flowers’ which contains some really original queer photography. There are parallels between now and then and I see the need tell the story through a visual language that is rooted in the Eighties but at the same time feels contemporary.

What drew you to this play?
What draw me to this play was that it’s about being on being inclusive but also about multi-perspective thinking. I find the whole world of LGBTQ very fascinating. It is something I am not wholly familiar with, but the team has a very open-minded approach and I feel very supported that I have been invited to explore this. I wanted to make this piece visually accessible to everyone. For me, it is not about focusing on a subculture within a society, it is about a subculture that’s open and related to everyone else. LGBTQ is one of the many social movements that require on-going effort to make a difference, which means concerns need to be re-examined and spoken about, here and now. On the eve of an unpredictable 2017 in terms of political and social outlook, I think the contemporariness in the play can’t be more timely.

What sources did you use to inspire your costume designs? How did they influence your final wardrobe?
A great source of inspiration is the Blitz Magazine and 1980s music videos, so it’s a mix of 1980s aesthetics and the DIY culture that you still see it in London today. There’re vintage, retro clothes shops that exist in many places in London. People have second-hand clothes their wardrobe and they adapt it and upcycle it, a similar kind of energy as in the eighties really. The DIY fashion has the potential to become something highly refined and that’s something we see in designs by well-known designers such as John Galliano and Alexander McQueen, and labels such as Moschino, just to name a few. Events in the Eighties also contributed towards the design, as racial tension, gay movement, and high unemployment rate all underscored the way people dress and express themselves.
The play allows me to explore these influences in terms of costumes, very much sensing the youth who goes to charity shops to not just shop but create. And we’ve got Brandi who’s on the other side of the spectrum who is creative and obsessive about visual statement through her outfit, experimenting with ideas using what she could find. The 1980s is the beginning of the ‘street fashion’ – although fashion designers back then didn’t like the label – now it is a term used in a positive way.

Were there any challenges in creating these looks?
We have a tight budget for the number costume changes and bespoke outfits. It was a good challenge as the characters in the play wouldn’t be able to afford expensive clothing anyway and the resourcefulness is part of the aesthetics, so all in all it doesn’t feel like a compromise.

To see Ingrid’s wonderful designs, book your tickets on the Albany’s website.