What we’ve learned from … Frances Bingham

In our weekly online digital drama club with older LGBTQ + people, we’ve been using work by queer dramatists to help us all boost our life-writing and performance skills. 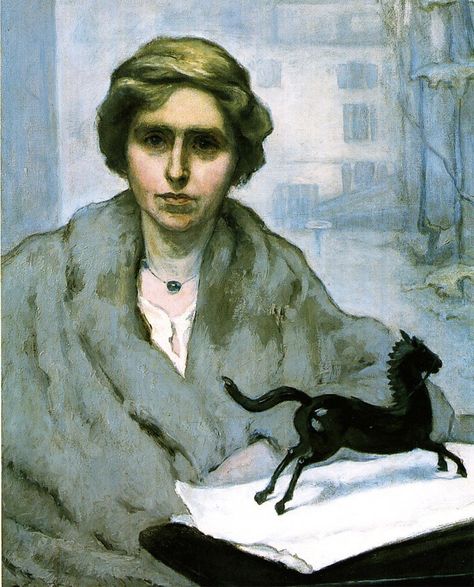 The Blue Hour of Natalie Barney by Frances Bingham premiered at The Arcola in the autumn of 2017. It’s a one-woman show, in which the lesbian pioneer Natalie Barney reflects on her life and art one afternoon in 1950s Nice.

This extract is from early in the piece, when Natalie, on her way back from lunch with her long-term lover (the painter Romaine Brooks – that’s her portrait of Natalie, left), describes a promising exchange with a woman she’s just met for the first time. The encounter is the inciting incident for the play – the narrative moment that generates all the action that follows and hints at the ending to come. 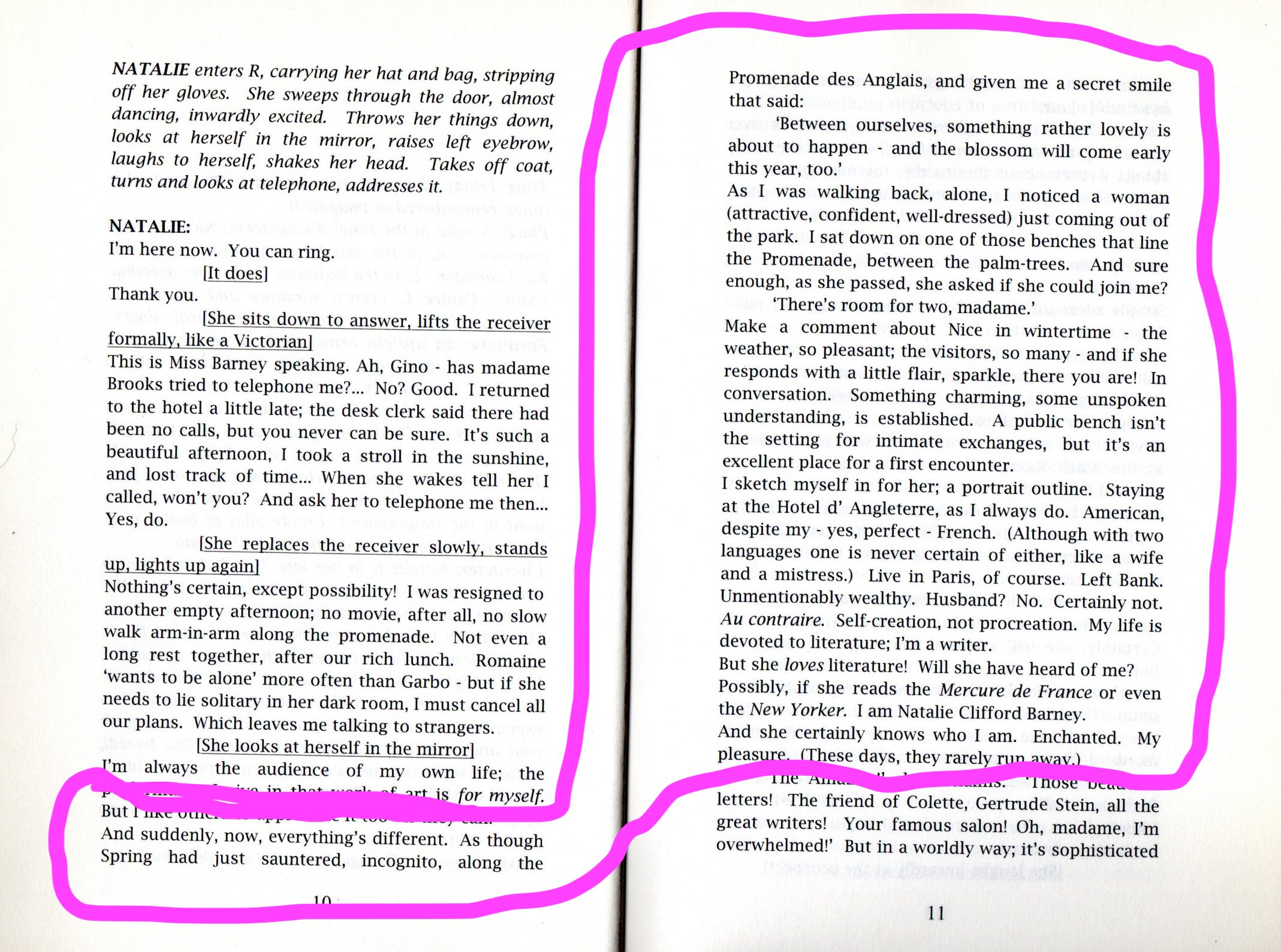 1 Just as with the Angels in America extract we looked at, you can clearly see a three-act structure supporting this story. In the first ‘act’, the protagonist, spots a good-looking woman she would like to get to know: so she takes up a position on a bench and waits for her to pass to see if she can create the conditions for connection. In the second, she sparks a general conversation about the weather, which later modulates into more important and particular disclosures about herself. In the third, the suitor reveals her thrill at the way the encounter has evolved. The die is cast.

2 Good story-telling relies on specifics. And Natalie is very specific. She doesn’t just notice the woman, she records the three things that caught her attention – that she is attractive, well dressed and confident. When she mentions the bench, she pinpoints exactly where it is – between the palm trees along the Promenade des Anglais. When she says she’s a writer, she mentions both an American and a French journal in which her work has been published.

3 The way we speak, specifically the figurative language we use, reveals just as much about us as what we say, if not more. When Natalie begins her story, she conjures up a vision of Spring personified as an incognito queer suitor who offers her the “secret smile” deployed by cruisers of all descriptions down the ages. Not only that, Natalie interprets this “secret smile” as presaging the early arrival of blossom, as if the seasons themselves are giving their blessing to what is budding through the rest of the piece. Similarly, her joke in the second ‘act’ about speaking two languages being like having a wife and a mistress both reveals the Natalie Barney approach to polyamory and represents another crucial step in the dance of seduction by implying that any existing relationship should not preclude starting another.

4 Exposition – the parsing out of important information from backstory – is most successful when it is artfully integrated into dramatic speech. It always works best when information to orientate the audience about who someone is or when and where the action is taking place appears to be entirely necessary to the scene that is unfolding. Thus here, Frances Bingham enables her protagonist to sketch herself in outline for the audience by reporting the sequence of disclosures she used to keep the conversation going with her suitor: that she is American; bilingual in French; resident in Paris; enormously wealthy; and definitely not married. 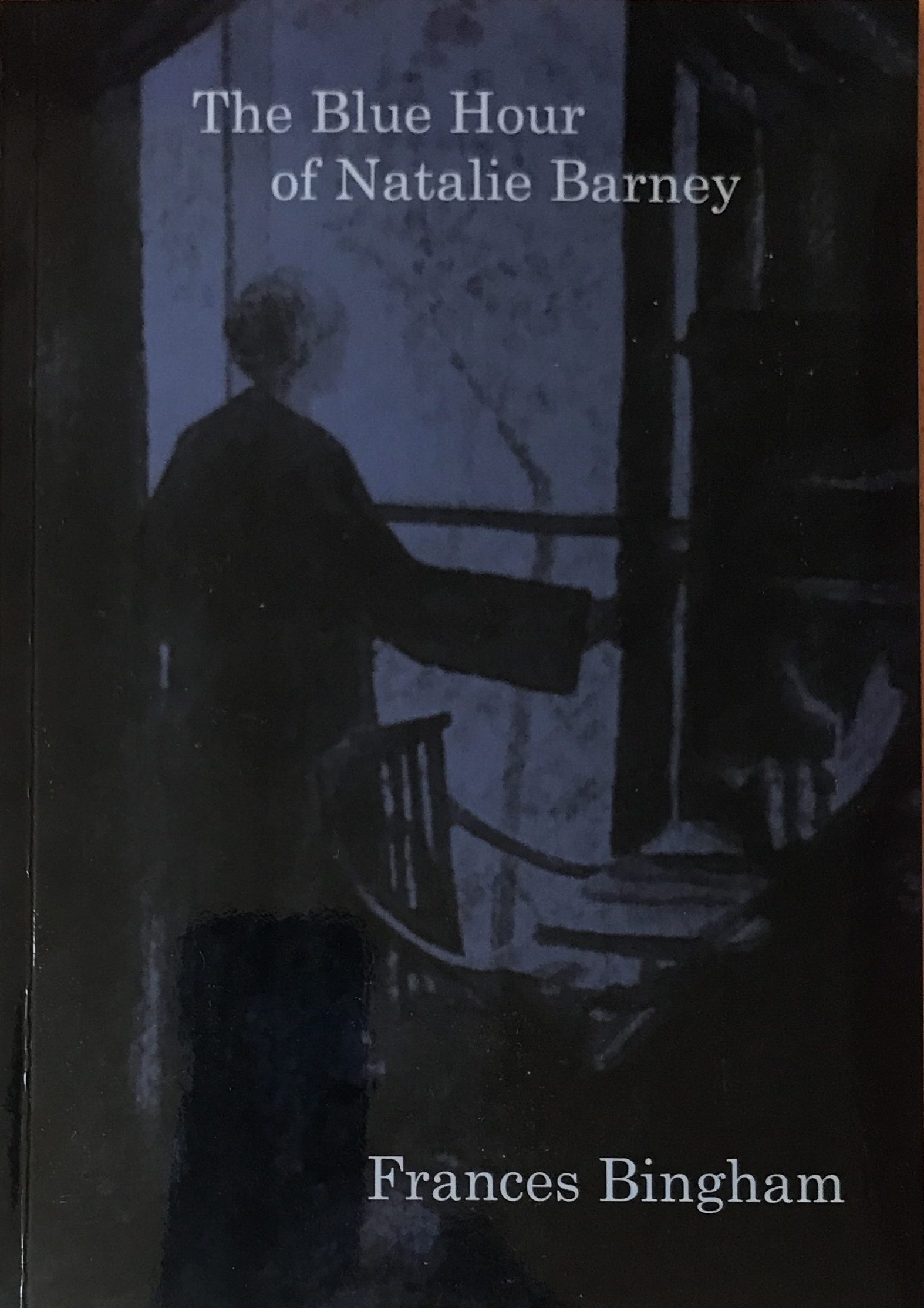 5 Our Inside Out workshops always open with improvised games using the ‘Yes, and’ principle. (A quick re-cap from Tiny Fey: “The first rule of improvisation is AGREE. Always agree and SAY YES …. The second rule of improvisation is not only to say yes, but YES, AND. You are supposed to agree and then add something of your own.”) Natalie offers a fine example of this way of thinking when the anonymous woman asks if she can join her on the bench (which Natalie has of course strategically occupied for the very purpose of encouraging such an inquiry). In answer to the question, ‘May I join you?’ (the delicate opening move in a seduction), Natalie does not simply say ‘Yes’ (which would not give her suitor any clue to her intention); she says, ‘There’s room for two, madame’. She responds to the question by agreeing and adding a coded hint at connection. 100 per cent ‘Yes, and’.

6 The ‘Yes, and’ principle can be used to turn a scene onstage. Which happens twice in this speech, at the end of each ‘act’. The first turn is ‘There’s room for two’, which spins the story forward because the woman joins Natalie on the bench. The second is at the end of the second ‘act’, after Natalie’s coded disclosure of her queerness: ‘Husband? No. Certainly not. Au contraire … My life is devoted to literature.’ To which her suitor replies: ‘But I love literature.’ Which is what leads to the suggestion of a later assignation in the third ‘act’ of the speech.

7 It’s all about the subtext. A language LGBTQ+ people are often unusually fluent in, since so many of us have learned the importance of coding our exchanges in the overwhelmingly heterosexist and homophobic societies we grow up in. So it is here. The “secret smile” that Natalie’s personification of Spring gives her is classic queer sub-text – a nod of mutual recognition at the least, or an invitation to deeper acquaintance. Similarly, in her exchange with the mystery woman, Natalie leaves her new friend to put together what she must mean by disclosing that she is the opposite of heterosexually married (‘Husband? …. Au contraire.’) and has chosen literary pursuit over family life (‘Self-creation, not procreation. My life is devoted to literature.’). To which her suitor responds in full ‘Yes, and’ mode by saying she loves literature and asking her for her name – her eagerness to continue the exchange a coded endorsement of Natalie’s rejection of heterosexual norms.

8 We should all find out more about Natalie Barney. For more than 50 years, the salon that she hosted at her home on the Rue Jacob (held in the late afternoon on a Friday, in the ‘blue hour’ of Parisian twilight) welcomed a vast array of cultural talent and power, including Colette, Gertrude Stein, Peggy Guggenheim, Nancy Cunard, Sylvia Beach and Isadora Duncan, as well as most of the great Modernists resident in, or passing through, the city of light: André Gide, Rainer Maria Rilke, Jean Cocteau, TS Eliot, Ezra Pound, James Joyce. (Marcel Proust never attended the salon itself but he did come to her house to research lesbian life while writing In Search Of Lost Time.) The exotic dancer Mata Hari is said to have ridden on a white horse through the garden at the Rue Jacob during one pre-war meeting of the salon – many decades before Bianca Jagger made her infamous appearance in the saddle at Studio 54 (NB Bianca maintains she didn’t ride the horse into the club but merely climbed onto an animal owner Steve Rubell had brought in). But the salon was only part of Natalie’s legacy. She also used her literary and social standing to promote women writers of the era. Since the Académie Française refused to admit women to its governing body at the time (and continued to do so until 1980), Natalie launched her own Académie des Femmes (Women’s Academy) to celebrate women otherwise marginalised by the patriarchy. And she wrote herself, of course – poems, plays and memoirs, almost all of them in French. Most significantly for LGBTQ+ people today, Natalie lived her lesbian life entirely in the open, conducting long-term relationships at the same time as shorter affairs and inspiring Radclyffe Hall’s portrait of lesbian salon hostess Valerie Seymour in The Well Of Loneliness. And she even has something to teach us about the current moment, when isolation and – in many cases – enforced inaction is challenging so many of us. According to one of the aphorisms she decorated her writing with (referenced in a BBC TV interview from the 1960s): “One must be idle in order to become oneself.”

• In our weekly digital drama club for older LGBTQ+ people, we play improv games, identify lessons from work by queer dramatists, write short monologues about our experiences of lockdown and then rehearse them to hone our performance skills. If you would like to know more, please email our participation producer, Daniel. No writing or performing experience is necessary!