We that are great fellows of pleasure: having fun with a ’50s rent boy 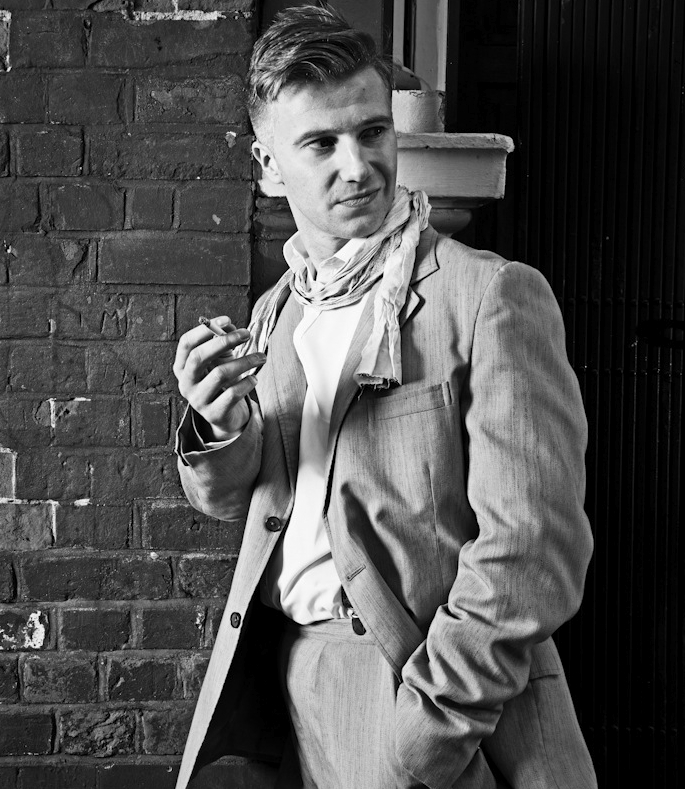 I was delighted when I found out that I had gotten the role of Julian in Cover Her Face (Julia in Webster’s original) because I knew that he was a character that I could have a lot of fun with. And fun was the feeling I wanted to keep with me when working on this character and in the rehearsals, because that’s what I felt Webster was offering in the text.

After my first reading of the play, I jokingly referred to Julian as the “whorish fool” of the play but even though I said that in jest, that really was how the character started to take shape. It soon became clear that Julian was promiscuous, as he was having an affair with the Minister (the Cardinal in Webster’s original), had had an encounter with Antonio’s friend Delio, actively pursued sex with Bosola and all this while married to the impotent Castruccio – a farce in itself!

One of the first things to do was to make Julian a relevant part of the 1950s queer underworld. At first I thought about making Julian just a promiscuous young man on the scene, someone who knew the clubs and cruising spots well, but that wasn’t enough of a hook – it felt far too generalised. In the original text, the character of Julia (Julian’s great great great great great great great great grandmother?) was the maid, which not only defined her status but it also meant that she was a party to information; someone who had access to private conversations while bringing in the food or polishing the candlesticks (a duty she was clearly good at and spotted for!). But whereas Julian also felt savvy,  he did not strike me as a maid in this remained version: he seemed less concerned with the cleaning and more concerned with men who could provide him with nice things in exchange for sexual favours. That’s when the penny dropped: Julian had to be a rent boy!

This felt like a great early breakthrough as it meant I could be really specific about what I was researching. I had found it very interesting researching the 1950s in general; looking at cockneys, queer life and gangsters. All those research topics were vital to creating the visual and sensual world of Malfi (the queer underworld club of Cover Her Face) but I could not seem to grasp enough information to form my ideas about Julian.

Once we had the eureka moment in discovering that Julian had to be a rent boy I decided that my first bit of research would be to type “rent boy” in to Google. That was… interesting… but not quite what I was looking for. Aside from lots of advertisements and porn websites there were some great articles about men who had become rent boys while being at university for extra cash to pay off debts or to literally pay their rent. This gave me an interesting insight in to why men, none of them really poor or even gay, engaged in oral sex for money. I learnt a bit about how the exchange worked but as this information was from the ’80s and ’90s, it didn’t feel enough.

What became seminal to my character was a fictional piece I found called The Dangerous Life Of Renter Boys on the Angelfire.com website but the author of this unfinished online book was anonymous, which is a shame as I really owe them a lot of credit for Julian. It was a fantastic and descriptive piece from the point of view of Bryce, a young rent boy in his early 20s speaking about his experiences in a male brothel in Whitechapel in the late ’50s and early ’60s. It was just what I needed because I am far better at learning through creative description than hard facts.

I was able to learn so much from this novel – fantastic little details like how they kept their suits looking immaculate because a “crumpled rent boy was a poor rent boy” and the fact that they always took off their own clothes because buttons were expensive to replace. Even learning that these boys were “selfish, bloodsucking rascals in an angelic-boy disguise” was a great visual note for Julian.

I felt this text added a real backstory to Julian and really felt confident in placing him in Malfi. What came next was how to play Julian. At first, I thought I would ramp up the camp and see where it went. What was great about going over the top was being able to hit the right notes of humour. In certain scenes, like in the exchange with Delio in the Minister’s office, I kept a lot of that camp humour because I felt it added a dismissive and catty side to Julian, almost like he had gotten all he could get from this man so had no further interest.

I chose to rein in this campness for a few reasons: one was that he needed to be a believable character and not pastiche because Webster wrote all of these characters with such depth and the text is too rich to be thrown away; another was that Julian had to be adaptable as many rent boys are. Are men paying for a bit of rough or a bit of fluff? I wanted Julian to provide both.

When pursuing Bosola, I thought it was vital that Julian initially engaged him in masculine way. I wanted to hold Bosola’s attention with a threat: “Now, sir, I will make you confess your treachery!” Chris Tester’s Bosola was a masculine and sexually conflicted man and it was already clear he despised the  overt effeminacy of Castruccio (“You come from painting now?”) so I knew Julian had to reel him in by acting like men he wanted and felt he needed to converse with.

I thoroughly enjoyed playing with the language in Cover Her Face and using it to seduce and tease the other characters. I was very conscious of not wanting to make all my intentions general, because there was a real danger of that happening. A lot of Julian’s intentions were to seduce so I had to think about my tactics, as there are many ways to seduce a person, and then I had to think of what I was trying to gain: was it sex? information? money?

I had to really pick apart the text and find the subtleties in the verse in the early stages of the rehearsals but of course all of that initial work flies out the window once we are up on our feet. Julian’s reactions to Chris’s Bosola and Jack Johns’ Minister became instant and I had to adapt quickly. All this aided the urgency of the scenes and we managed to keep it fresh the more our confidence grew.

The seduction wasn’t just in the language, it was physical too. Extremely physical! It felt wrong to hold back with such a sexually charged character… so I didn’t! I was spanked, tabled, snogged, groped and beaten and I didn’t want to feel inhibited because it all felt right in the context of the play. Julian’s role in context was to use his sexuality to get what he wanted so that’s what he did and had great fun being out of my comfort zone.

It wasn’t all sex and violence, though, in Julian’s journey. The early tea party is a great scene that establishes lots of relationships in the play, especially the Duchess’ and Antonio’s, but it always felt like a bit of a struggle throughout the whole process. The party consisted of five gay men, including two drag queens, and originally we were playing the scene in a very well-mannered way, all being very polite to each other. At first I wanted to play an idea that Julian was annoyed at Castruccio for bringing me to this drab tea party and I was extremely bored of him. I thought, in my infinite wisdom, that it was a great idea but in hindsight it was way too harsh for an opening scene: it needed fun because the tragedy hadn’t happened yet!

But the whole scene just didn’t seem to work. On the final day before the show we rehearsed it again and, probably due to tiredness, I had an idea. I thought: these are five gay men in the 1950s having a private party where they are allowed to be themselves without fear or prejudice, so why not have them enjoy it and send it up? I suggested that we heighten the atmosphere, put a rocket up its arse, so to speak. And that we did. It was great because it got silly and we had fun with it, I personally felt that we were able to find the joy and humour that these characters could only have in sanctuary and not in the real world and it really lifted the spirit of the scene.

I loved the concept of the play because for me as a gay man, I was able to explore and celebrate the history of a culture I belong to. I felt connected to Julian and I felt connected to Malfi in a way that made me want to tell the story. What had been going on in the media at the time of performance in Russia and Uganda deeply saddens me. But I felt so blessed to be able to speak freely in a country that has changed its views on homosexuality so much radically for the better, celebrating a history that gives me the courage and pride to live as a gay man.

I was sad to say goodbye to Julian but I look forward to the possibility of him returning in the future, and having this wonderful experience to look back on. I wonder how my ideas for him will change and progress while always looking back to the 50s and a past that belongs to all of us.