“I am Duchess Of Malfi still”: how to create a 1950s upper-class alter-ego 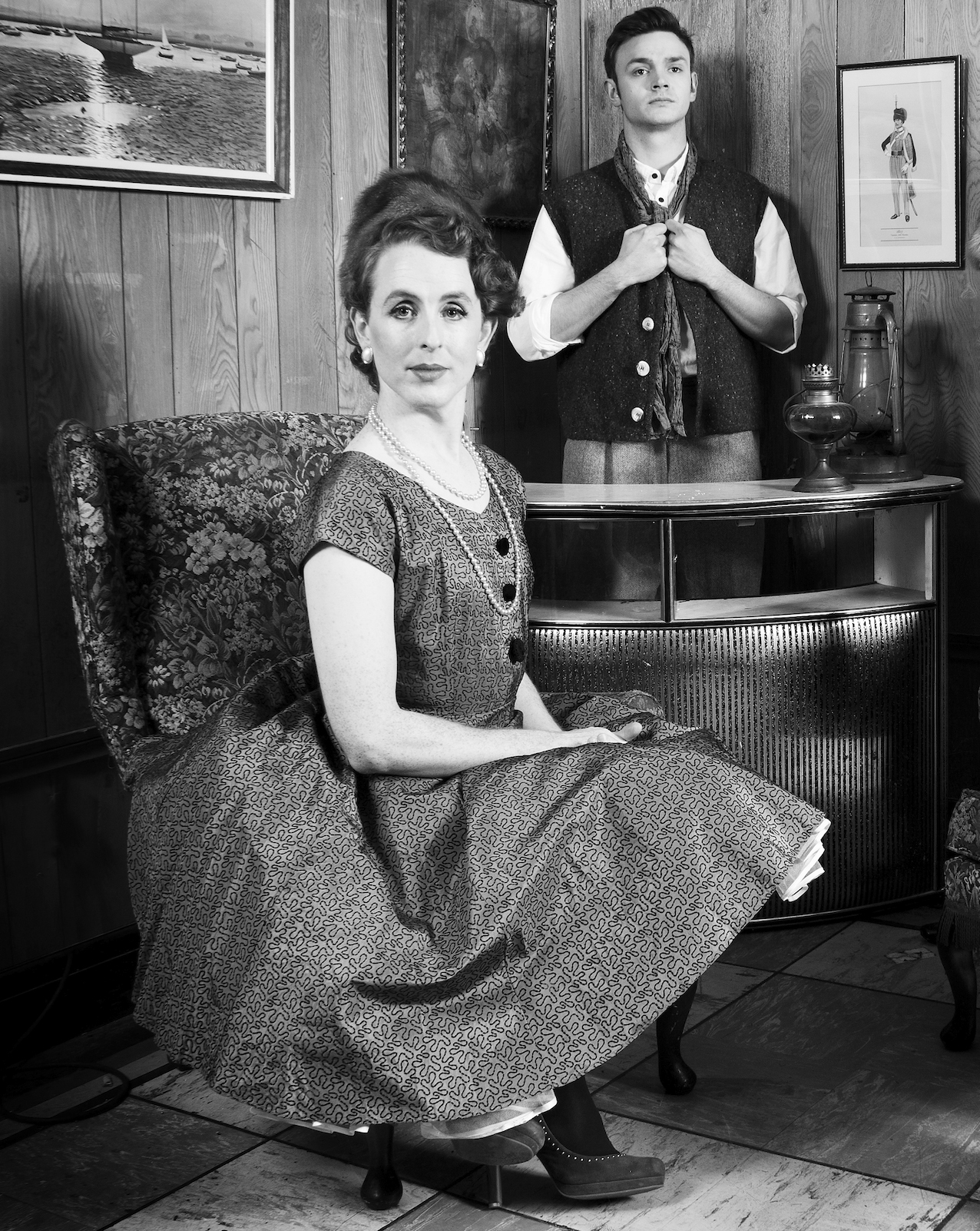 Lauren John Joseph as The Duchess (left) with Oliver Yellop as Cariolo, photographed by Leon Csernohlavek

It’s a year to the day since Lauren John Joseph auditioned for Cover Her Face, back when it was not much more than a good idea with a bad working title. As they were in Berlin at the time, we did it over Skype, but even the inevitable picture breakup and dropped connections couldn’t conceal how the part should be theirs. Since finishing Cover Her Face earlier this year, Lauren John Joseph has been developing a tantalising new show at Battersea Arts Centre (The Last Night in the Life of Alexander Geist, which should hit the stage next year); jetting back to Berlin to open the V&A’s David Bowie Is … exhibition; and promoting their eye-wateringly surreal first novel, Everything Must Go. In a rare moment of downtime, Lauren John Joseph opens up to Inky Cloak on the power of playing The Duchess.

DF: How did you prepare for the role of The Duchess before rehearsals began?

JJ: Well, before rehearsals kicked off it was mainly just about looking at the script and thinking about who this person might be? So, it was pretty basic stuff. It was when rehearsals started that things got interesting. That’s when I started to watch all of the old movie clips and look at fashion illustrations to see how people held themselves in the 1950s (when the play was set), noticing that ladies at that time crossed their legs at the ankles, rather than leg over knee. I watched a lot of Kim Novak movies for deportment.

You had some great references in our ‘show-and-tell’ on the second week of rehearsals.

I showed a Nancy Mitford picture by Cecil Beaton, which I thought really summed up the late 1950s era of our play. It captured a certain sort of glamour, and something very upper class and something very English, but also artistic. And Cecil Beaton was such an interesting character himself, I thought there was a nice nod in his oeuvre in terms of what was happening in the play, as well, in terms of sexuality. Beaton produced images that were notoriously staged but also retouched by splicing up photographs. I like this idea of creating an image. The Mitford sisters were so famous at the time, the most beautiful women in the country from an illustrious family. All of them got into very different kinds of scandals: one married a communist, one married the Duke of Devonshire, and one married Mosley, a fascist politician. They were just tabloid sensations their entire lives. I think they were very interesting women, they shed light on the culture – socially and in the media – of when we set the play. But also that, much like The Duchess, they made these decisions about who they’d love against the family, and sometimes to great uproar. So that’s why Nancy Mitford was an interesting person to touch on.

And how much experience had you had of blank verse before rehearsals?

Did you learn useful things in our verse workshops, where we aimed to identify all the tools there are within the poetry for conveying meaning, such as short lines, shared lines, long lines, metre and metrical variation?

Definitely learning the language is very helpful in rehearsals. Everybody else seemed to have a good grasp on what it was and how it’s supposed to be done. There were one or two things I found helpful; the idea of shared lines, in the script, when your line looks like it’s going to stop, and it’s indented and someone else’s line takes over. That was interesting to think about musically, actually. I’ve been writing songs recently thinking of this concept to help match the chord progression to the lyrics, to think about beats as being almost like a shared lines for someone to measure where the new melody matches the chord. So I did find it useful. But I don’t know how much it informed what I did, although it probably gave a context to what I was doing. I learned the text in order to be able to present it in a way that made sense to everybody. So I think that was one of the main things that I was going with – slightly against probably the standard way of delivering the text by making it a little bit natural, because I was learning it for myself and to be able to express it clearly to people – very complicated metaphors, very heavy language, and jokes that aren’t really funny, fairly silly scenes – and in order to make them look believable and to communicate them to an audience who, perhaps, wasn’t familiar to that style of language. It was good to have a context but I don’t know how much I followed that context. I think maybe I took it in a different direction, but I’m glad because there were a few people who said that the way I delivered the lines meant that it was completely comprehensible, which I think is nice.

Did you pick anything up from the rest of the cast?

Actually, it was very good as a character study to see actors at work! So that was quite entertaining. But in terms of craftsmanship, I’ve got to say that I don’t think I picked up anything directly besides a newfound respect for the way that all of the actors really got into their roles; the way that they functioned as being that character. It wasn’t quite method acting, but I liked watching people wrestling with the idea: “Well, I don’t … I haven’t figured out yet who my character is and I still don’t know my character’s arc.” This sort of thing. Which, at first, was kind of hilarious, but then it did help bring a certain level of professionalism and gravitas to it, and also because they were so talented that it really did encourage me to push as hard as I could to be as good as they were. And I think I succeeded in doing that.

Well, working with my own words I always have a license to be a bit freer. I don’t have to say the precise words, counting the metre, and usually people aren’t waiting for a specific word to react to. And that has its own advantages and disadvantages. Working with a fixed script in one way was quite a relief, I only had to think about how well I was delivering the text, not about how well written the text was, which was nice because often when I’m performing my own work I’m thinking: “Ah, why did I write that? That’s a terrible sentence. That’s not funny.” So doing this, that burden was taken from me. And it was actually nice to have such a structure, you just have to inhabit it.

Is it the biggest cast you’ve worked with? Is it different working with a larger cast than solo or just one or two people?

It is the largest cast. I did a West End show called Infinite Variety, which was a cast of three but the backstage crew was enormous, there must have been another 25 people so I’ve worked on large productions before, whereas in this production there were ten actors and four or five people behind the scenes, which is madness! But, yeah, the dynamics are very different, it was interesting to see the tone of the conversation, how this would all shift depending on who was feeling particularly brash that day, or was setting the tone.

Whichever particular constellation was rehearsing must undoubtedly affect the dynamics?

Yes, it was very interesting to see that and how that carried over into the dressing room. I made some real good friends out of rehearsals. And it was exciting to be among all those people. It was certainly never boring. It was also a relief, I must say, when you do things that are much smaller, especially when you’ve written them, like my previous show, Boy in a Dress, which was just myself and another actor. So it was really resting entirely upon us. And that’s a weight, but also after the show was finished, then you’re the target, specifically, for everyone’s praise or horror, so it’s nice to be able to escape and not to feel so entirely scrutinised.

Have you thought about how you have developed as a performer since finishing the show?

I think I gained a lot of confidence, actually. I was always very self-assured as a writer and a performer, someone who could naturally be entertaining for a limited period of time. But I never considered myself to be an actor, and now I think that it’s something I think I can definitely say that I can do. I’ve been going to castings as they turn up and I no longer have any fear of auditions, which is amazing. Because since my mid teens I’ve dreaded and performed horribly at castings and auditions, whether it was for yoghurt commercials, Prada runway shows or plays: I was always appalling because I never felt that I had enough talent. I felt I had my own little niche, which was to write and create my own little work, and I should stick to that, but this really expanded my horizons. I feel ready for other projects now.