The thump of the music, like some powerful creature barely contained

Steve Swindells, the club promoter, musician, photographer and all-round creative, reflects on how he put together the pioneering and inclusive LGBT club The Lift in the 1980s, and helped inspire gay novelist Alan Hollinghurst. 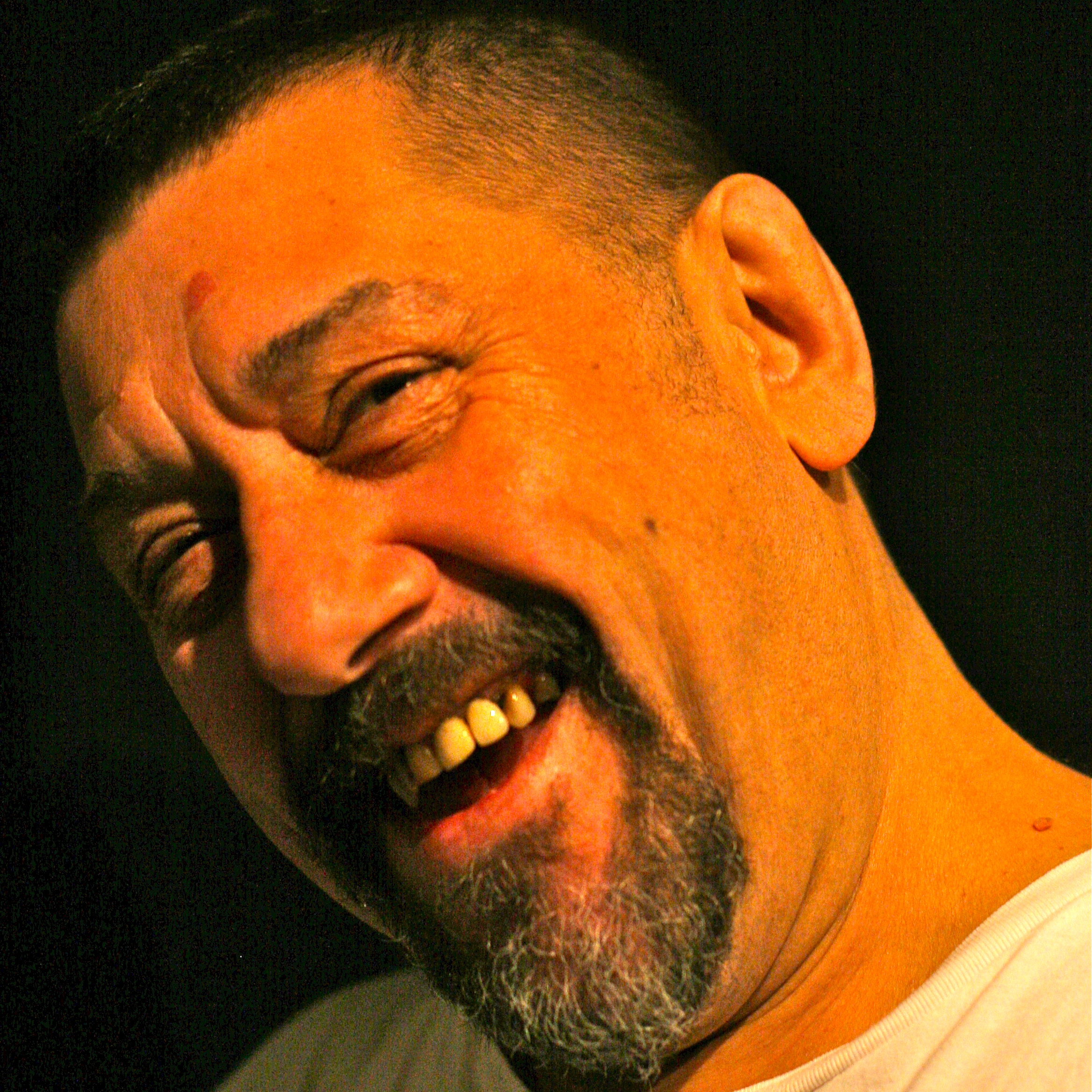 Tracking queer spaces of the past can be tricky when there is so little trace left in the present – even when the past in question is the relatively recent 1980s, the era in which we have set our new show, We Raise Our Hands In The Sanctuary. The wrecking ball has demolished the bricks and mortar of many spaces, change of ownership or wholesale refurbishment has erased others, while large numbers only survive in the memories of the dancers who once filled their floors. That’s why collections like the black LGBT archive launched in 2005 by the rukus! Federation (and held at the London Metropolitan Archives since 2010) and online resources such as Gay in the 80s, Shapers of the 80s and The Pink Past are so important, especially when club culture itself is still too frequently regarded by outsiders as a low-status pastime, rather than a vital sphere of communal self-expression and, for LGBT people in particular, a potential space of collective liberation.

But while researching many 1980s queer spaces requires digging through archive boxes and rolls of microfiche, there is one that is much easier to access: Steve Swindells’ pioneeringly diverse club night The Lift, which lives on in the pages of one of the most famous gay novels of the 1980s, Alan Hollinghurst’s The Swimming Pool Library, where it is the inspiration for a night called The Shaft, reimagined from the writer’s frequent visits to its best-remembered home in Stallions near Tottenham Court Road.

It was his disenchantment with the LGBT scene of the early 1980s that led Steve to start promoting club nights (he’s also a successful musician with his own solo projects and has maintained a long-running role with the rock group Hawkwind and its later reincarnation Hawklords). “I was frustrated because the clubs were so shit, like the Copacabana in Earls Court – just pure clonesville, really dull,” he recalls. Neither was he very impressed with Bang, the Monday nighter that would later morph into G-A-Y in the 1990s, homed at what was then The Sundown on Charing Cross Road (later Astoria 2, which, like Stallions, has since been lost to the collateral damage of Crossrail). “Bang was so old school it wasn’t true – DJs on the mic as if they were aspiring to be on Radio 1, saying stuff like, ‘Hey, come on boys and girls, let’s get up to this great track’ … it was awful!” he says.

Steve says he wanted to drag gay clubbing kicking and screaming into the 1980s (“perhaps less of the screaming and more of the kicking!”) based on his own experiences on the underground scene both in New York and London. He had had first-hand experience of the epochal Paradise Garage, where black gay DJ Larry Levan would conduct marathon ecstatic weekend sessions for the 3,000 New York dancers sweating it out on the alcohol-free dancefloor. Steve is not the only Londoner to have taken inspiration from the New York club: most famously, Justin Berkman built the Ministry of Sound on the same model, and after the demise of the Garage in 1987 (when owner Michael Brody became too ill to continue), Larry himself even played there before his own untimely death in 1992.

Steve’s other inspiration was much closer to home – the unlicensed house parties (or ‘blues’) that young black people often ran on South London estates in response to racist door policies that excluded them from West End clubs at the time. You paid a pound to get in to a packed flat, and once you were inside, a bottle of beer cost £1 and a shot of spirits £2, and the music was a mix of imports from the black American scene and Jamaica. “My memories are of lots of beautiful men, much bumping ’n’ grinding, clouds of weed smoke, really good vibes and no trouble at all,” Steve writes on his blog Sex N’ Drugs N’ Sausage Rolls. “I don’t recall the police closing any down, but this was before the days of the dreaded Environmental Health Police, or whatever they’re called.”

It was at a blues that Steve discovered DJ Mel, who would become of one his mainstays at The Lift. “I had one DJ from Adam’s (later Subway) on Leicester Square – John – and someone advised me to get myself invited to these underground black house parties and that’s where I discovered Mel – awesome DJ,” he recalls. 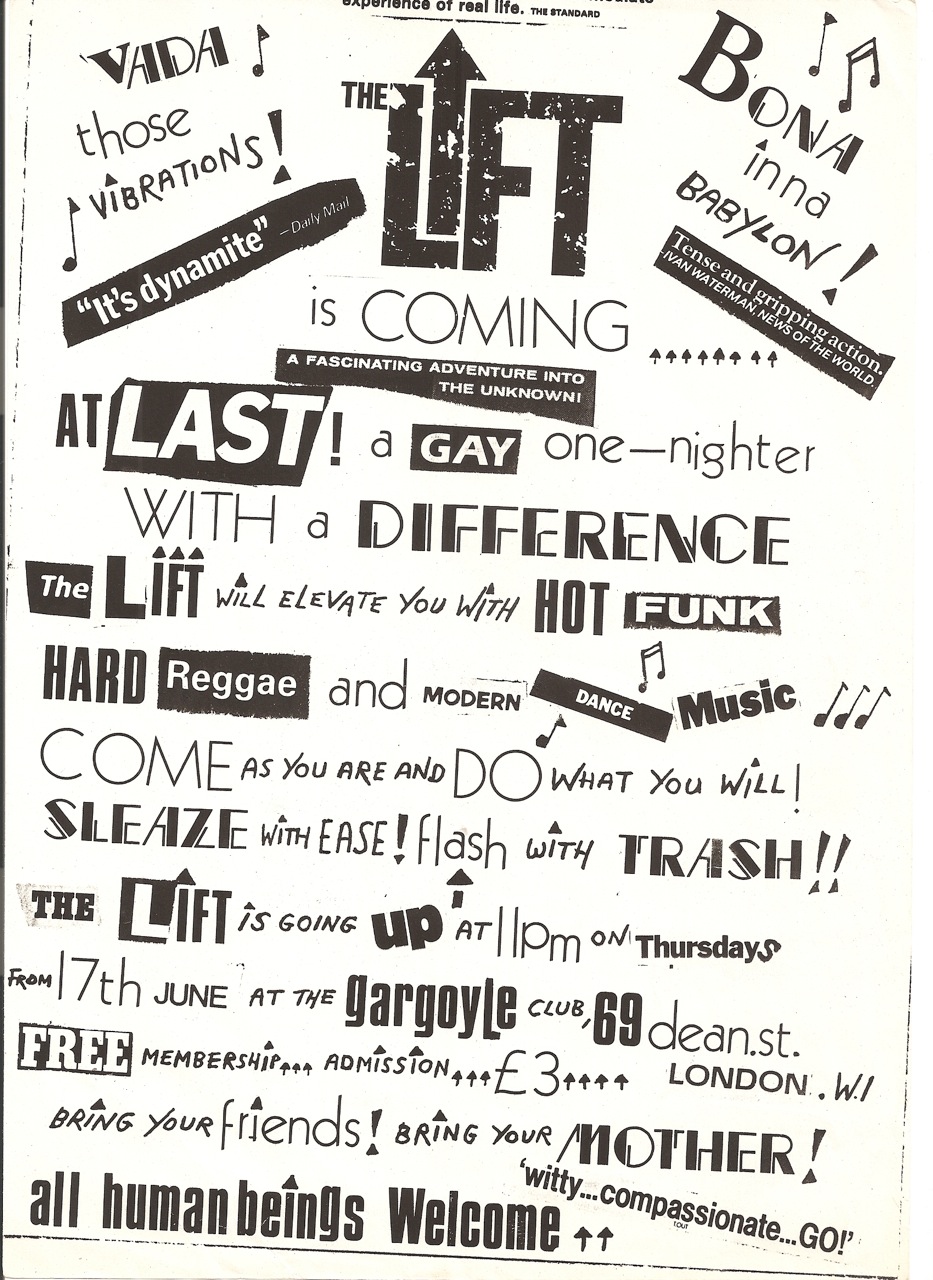 Original flyer for The Lift, courtesy of Steve Swindells

Steve launched The Lift in 1982 at The Gargoyle Club on Dean Street (the space that incubated a string of historic and influential club nights, including London’s first-ever West End rap night, The Language Lab). The original flyer famously outlined The Lift’s inclusive door policy: All Human Beings Welcome. But the club is probably best remembered for its three years’ worth of Friday nights in Falconberg Court, where the venue was called Stallions at the time (1990s-era clubbers would know it as Substation and it will always be Ghetto to the 2000s generation). “Stallions was deliciously retro,” Steve says. “It was a disco with pillars that were fish tanks!”

The Lift swiftly made a name for itself among the cognoscenti on the scene. “It was a resounding success, even though it was only small – it was absolutely rammed,” Steve says. “The dancers were mostly black – for many black gay guys that was the first place they could go.”

One young white gay guy who became a regular at the night was Alan Hollinghurst, who was at that time working for the Times Literary Supplement and was still to publish The Swimming Pool Library, his debut novel that would feature a thinly-disguised version of The Lift. When the novel did appear in 1988, it offered a phenomenal account of what dancing at The Lift must have felt like, making allowances both for the creative freedom of fiction and the very particular lens through which its protagonist sees the world around him.

“The thump of the music, like some powerful creature barely contained, came up out of the ground and gathered around us as we went in at the door,” says young aristocrat William Beckwith, describing a night spent with his boyfriend Phil at The Shaft in chapter nine of the text. “On the stairs it began to be really loud, the whole foundations humming with the bass while a thrilling electronic rinse of high-pitched rinse set the ears tingling. From now on talk would be shouting, or confidences made with lips and tongue pressed close to the ear: we would be hoarse from our intimacies. The medium of the place was black music, and even the double-jointed sparseness of reggae came over the dance floor like a whiplash.”

Noting that the space would mean different things to different groups on other nights, William reflects on its evolution (which mirrors that of its real life original). “The club went back a bit and under different names had been a modish Sixties dive and before that a seedy bohemian haunt with a pianist and alcoholics. The décor, of what was essentially an arched, brick-walled cellar, was correspondingly eclectic, the bar overhung by a thatched roof, and the sitting-out area screened from the dance floor by a huge tank of flickering tropical fish. On first acquaintance these features seemed hideous or absurd, and gave me the sinister feeling that nightlife was still run by an elderly, nocturnal, Soho mafia who actually thought such details were smart. Soon, though, they became camp adornments to the whole experience, and I wouldn’t have had them changed for the world.”

William initiates the couple’s move onto the dance floor, where the DJ works the records so that “the rhythms of one track, clean and fierce, cut across and then went under the rhythms of the next.” But the lovers’ connection on the dance floor is not only to each other – it is to everyone around them. “On the floor there was competition, more athletic than sexual, and I would find myself challenged, magnetised by strangers, drawn into faster and faster action, though no words were said, we affected not even to look at each other. And some of the kids there could dance. Sometimes a ring would suddenly form around one or two of them, and we hung on each other’s shoulders to see them – their brief, fizzy routines of backwards handsprings, jack-knife jumps and other crazy things. Boy after boy would follow, explode in action, stumble back into obscurity; and then the ring would dissolve, the crowd would repossess the floor.”

Having been partly inspired by the New York scene, Steve recalls how he was once tickled to hear some very positive feedback about The Lift on one of his regular visits to The Big Apple’s infamous Studio 54 one night. “I was sat in the chill zone, where you could look down on the dance floor, and got chatting with this black guy,” Steve recalls. “When he found out I was from London he asked if I knew a club called The Lift: I didn’t give it away straight away as I wanted to hear what his thoughts were – he said it was by far the best gay club he’d ever been to in his life because it was so down to earth, it was for everyone and it was all about the music. We ended up spending the night together, although I can’t remember that bit!”

After three years in Falconberg Court, The Lift first moved to Fouberts, off Carnaby Street, and after that to The Embassy on Old Bond Street, another space inspired by New York, where Marilyn once worked as a waiter and which would ultimately be immortalised in its own way in the video for Sylvester’s (You Make Me Feel) Mighty Real. [youtube https://www.youtube.com/watch?v=Ifr13Upytb4&w=560&h=315]

The Lift also hosted numerous one-off events across the capital, including London’s first illegal warehouse party in Rivington Street in 1983, back when Hoxton was still a post-industrial backwater, and a Bank Holiday blues on a very rough estate in Stockwell in 1985, when some of the dancers defended a drag queen who’d been mugged by some BMXers on the way to the party – and even faced down the bicycling thieves’ scary older brothers. (You can read the full story on Steve’s blog).

Steve himself didn’t realise he had helped inspire The Swimming Pool Library until he started reading the novel in the 1990s – when it didn’t take him long to catch on. “I thought, ‘Hang on a minute: columns with fish tanks, Friday nights, lots of black people, great music, called The Shaft – this is The Lift!” he recalls. The novelist himself later confirmed he had connected the dots correctly when they met on another inclusive dance floor – Patrick Lilley’s long-running house and garage Sunday nighter, Queer Nation (originally at The Gardening Club in Covent Garden, where The Apple Store now stands, and later at Substation South in Brixton). “I was at Queer Nation one night with an old flatmate who was going out with Alan,” Steve recalls. “When he introduced me to him, I said, ‘I’ve got to ask you – although I know the answer is Yes – but please confirm: was that The Lift?’ And he said: ‘of course, I was there every week!’”